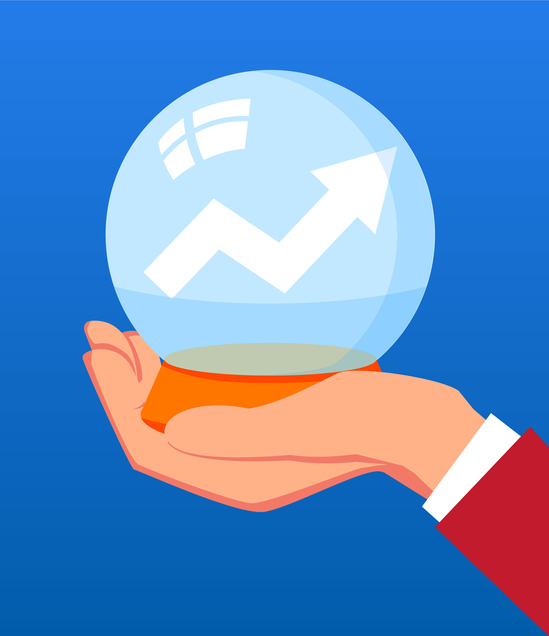 Forecasting short-term trends is notoriously difficult, yet every year Wall Street gurus, economists and leading financial institutions issue predictions about what they believe will happen in global markets over the next twelve months. Sometimes they get it right--more often than not, they don’t. And sometimes they make spectacularly bad calls.

With rising inflation, choppy markets, and a continuing pandemic, prediction was particularly difficult last year. But that didn’t stop the gurus.

This would all be harmless nonsense if billions of dollars weren’t wasted trying to follow this flawed advice. This is why we at Symmetry Partners do not believe in short-term predictions or forecasting and instead believe in diversified, long-term portfolios grounded in evidence, data, and academic research.

Here are 10 of some of the worst predictions about markets and economies in 2021.

What actually happened: The S&P 500 ended 2021 up 26.9%. There was no crash in July or during the fall. Dent, author of the 2009 book, The Great Depression Ahead, and the 2011 book, The Great Crash Ahead, has a notoriously bad track record of failed alarmist predictions. Yet, for whatever reason (dramatic headlines generate clicks?) he is still interviewed by respectable media outlets.

What actually happened: Frankel acknowledged that these predictions were bold. They were also spectacularly wrong. Only one actually happened, with oil ending the year slightly above $79 a barrel. Batting .250 doesn’t even put you the Minor Leagues.

What actually happened: Instead of showing weakness, the U.S. dollar rose 6.4%. The S&P 500 significantly exceeded these analysts’ expectations, returning almost 27%. And their expert stock picks all underperformed the S&P, returning an average of -3.5%.

What actually happened: The S&P 500 significantly outperformed Wall Street expectations—closing out 2021 with a 26.9% return.

Momentus) ended 2021 in negative territory. The best performer lost nearly 18%. The worst, almost 78%. On average, these 5 stocks lost a spectacular 41% in a year that generally favored Growth stocks.

What actually happened: Despite the investment gobbledygook of catalysts and reversing cycles, the baton of global growth stayed in America. Global Developed Markets, as measured by the MSCI World ex USA index returned 12.62%, performing only about half as well as the U.S.

What actually happened: The dollar enjoyed its strongest year since 2015. While Asian markets experienced significant downturns. Chinese markets lost almost 22%. Korea was down more than 8%. And Japan eked out a measly 1.71% return. The Asian decade was not off to a strong start.

What actually happened: Hedge funds as a whole have lagged the S&P 500 significantly for years. And 2021 was no exception, with hedge funds, on average, returning 7.47%. Every major type of strategy, from Equity Long/Short to Quantitative to Event to Multi Strategy, was outperformed by the S&P 500 by 6% to 30%.

What actually happened: There was no apocalyptic stock market meltdown in 2021. Many Wall Street “legends” are investors who made one significant and successful prediction—which they then coast on for the rest of their careers. And if a prediction doesn’t come true, just move the goal posts. Like a stopped clock, eventually you will be right.

What actually happened: There may be wisdom in crowds, but apparently not when it comes to meme stocks. For many of these stocks, the buzz ran into buzz saws after their initial surges. GameStop dropped 57% from its highs. AMC also dropped 57%. And the VanEck Vectors Social Sentiment ETF ended the year down nearly 10%.

Symmetry Partners, LLC is an investment advisory firm registered with the Securities and Exchange Commission. The firm only transacts business in states where it is properly registered, or excluded or exempted from registration requirements. No one should assume that future performance of any specific investment, investment strategy, product, or non-investment related content made reference to directly or indirectly in this material will be profitable. You should not assume any discussion or information contained in this material will serve as the receipt of, or as a substitute for, personalized investment advice. As with any investment strategy, there is the possibility of profitability as well as loss.

What has been driving inflation?  Cars!

As the economy continues to rebound from the pandemic-related slump, inflation has recently been...
Read More

What (if anything) Should We Make of Evergrande?

Chinese construction giant Evergrande is flirting with default on its $300 billion of liabilities,...
Read More

Sometimes You Get The Bear…Sometimes The Bear Gets You

In markets, the terms “bull” and “bear” refer to optimists and pessimists.  While the terms come to...
Read More